Alien enthusiasts believe that well-defined tracks that lead to Mount Hadley on moon’s Northern hemisphere could be proof of extraterrestrial existence.

Conspiracy theorists all across the world have long been alleging that aliens are secretly living on the lunar surface. These alien enthusiasts strongly believe that NASA is well aware of extraterrestrial existence on the lunar surface, and it is one of the primary reasons that refrained the agency to visit the moon after the Apollo mission era.

Adding heat to these outlandish alien claims, a transcript between astronauts who were part of the Apollo 15 mission reveals that they found neatly organized tracks on the lunar surface, Express.co.uk reports.

These tracks on the lunar surface were leading to Mount Hadley, a mountain range located in the Northern Hemisphere on the moon. Please find below the transcripts between Apollo 15 astronauts and the ground crew, as reported by Express. 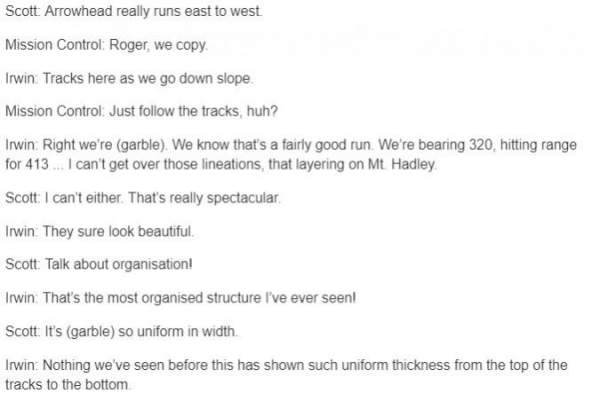 As this conversation between the astronauts and the ground crew became viral, conspiracy theorists strongly started arguing that these tracks are concrete proof of alien existence on the lunar surface. These conspiracy theorists strongly argued that several anomalies in NASA images from the moon, and the recent UFO sightings near earth’s natural satellites indicate the presence of artificial intelligence.

A few months back, China had landed its Chang’e-4 probe on the dark side of the moon. Before the mission, many conspiracy theorists predicted that the Chinese mission will encounter extraterrestrial aliens on moon’s far side that is not visible from the earth due to tidal locking. However, the mission went ahead as planned, and until now, Chang’e-4 has not detected any traces of extraterrestrial presence there.

On July 15, India had planned to launch their ’Chandrayaan-2’ space probe to the dark side of the moon. However, due to unknown technical glitches, the launch was postponed. The Indian Space Research Organization (ISRO) is expected to announce a new launch date soon. ư