A toddler born with only a tiny amount of healthy brain tissue has defied the odds to make an almost full recovery.

Michelle Wall, 43, and her husband Rob, 50, were warned their unborn son Noah, now three, was unlikely to survive as he had developed hydrocephalus.

This is a build-up of fluid in his skull that destroyed all but two per cent of his brain.

Mrs Wall discovered three months into her pregnancy that baby Noah had a catalogue of health problems.

These included spina bifida – a condition where the spine does not develop properly, leaving a gap – rare chromosome abnormalities and hydrocephalus.

She was offered terminations by doctors, who were so convinced Noah wouldn’t survive that the couple underwent the devastating task of buying a coffin for their son.

Noah Wall, now three, was born with just a tiny amount of healthy brain tissue. He has stunned doctors after recent scans showed the organ’s functioning has recovered Noah (pictured with his mother, Michelle) has amazed doctors with his survival despite having a catalogue of serious health problems Image shows the scan of Noah’s brain when he was born (left), with fluid in black showing very little healthy brain tissue. The scan on the right shows his brain now, almost fully functioning But against the odds, at a check-up last week, Noah, three shocked doctors after scans showed his brain had almost full function.

’No-one expected this to happen. We’ve had three years not knowing how long he’s going to live so to hear his brain’s almost back to normal is beyond belief.

’Rob and I broke down when we heard the news, it was like a dream. I’ve never known anything like it – even the consultants were in tears.

’Nobody knows how or why Noah’s recovered. It’s baffling but of course we’re over the moon.

’I think it’s down to his independence from such a young age. He’s had a specialised wheelchair from the age of one so he’s had as much independence as most children.

’That independence has helped his brain. He’s always made his own decisions and he’s such a smiley, happy little boy. We couldn’t be happier.’

Claire Nicholson, Noah’s consultant neurosurgeon at the Royal Victoria Infirmary in Newcastle upon Tyne, said: ’Spina bifida is commonly as‌sociated with a build-up of fluid inside the brain: this is often diagnosed on antenatal scans, as it was with Noah. 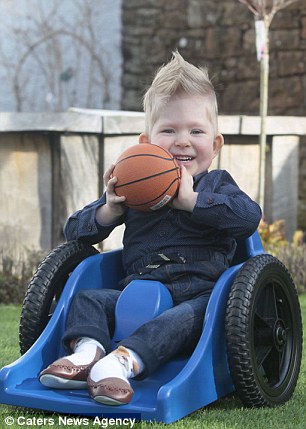 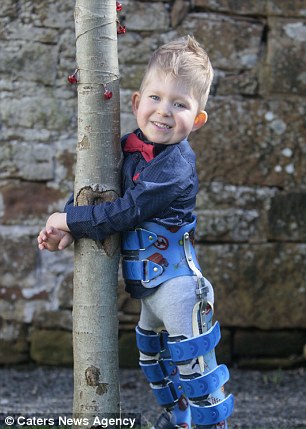 Noah also has spina bifida, which affects his spinal cord, and chromosomal abnormalities. Despite his health problems, his parents say he is ’smiley, happy little boy’ 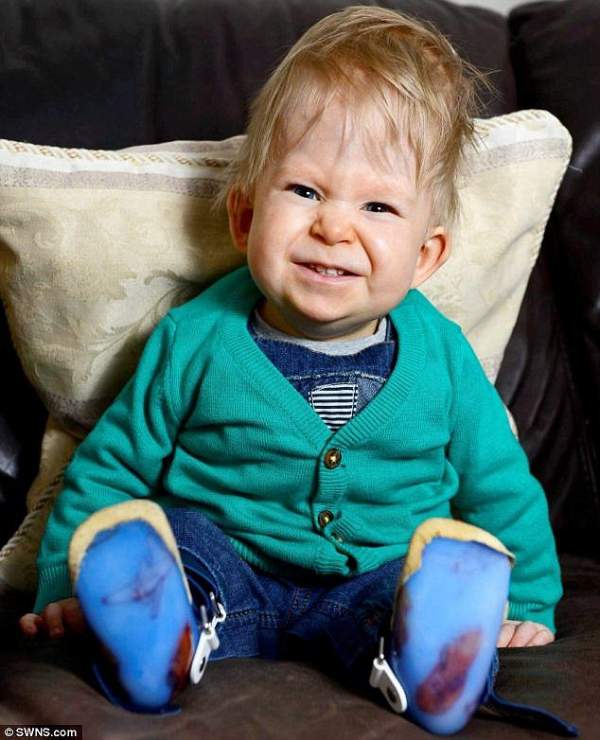 ’Noah had severe hydrocephalus and the pressure of the fluid caused Noah’s brain to be squashed – hence the scans showed that the overall volume of his brain was greatly reduced.

’Treating the hydrocephalus after Noah was born relieved the fluid build-up and restored the pressure to normal.’

The MRI carried out last week shows that Noah’s brain has made a ’truly remarkable’ recovery, she added.

She said: ’The scan demonstrates that Noah’s brain is now close to normal size for his age – which is a radical change from his antenatal and immediate postnatal scans.

’How this happens is not fully understood but it is likely that the small volume of brain we see in cases like this is due to pressure on a compressible structure – so the relief of pressure by shunt insertion allows the brain to expand to its natural size. 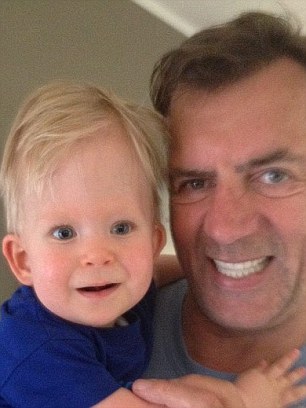 Before he was born Noah’s parents were advised to abort him because he had spina bifida, as well as fluid on the brain and rare chromosomal abnormalities

’Noah’s father used the analogy of the brain being like a piece of memory foam, which is an excellent way of illustrating a rather complex phenomenon.

’Noah’s brain will have been developing normally in the early part of Shelly’s pregnancy, then the fluid build-up compressed it for a while, then when the pressure was relieved, it bounced back.

’Noah has greatly exceeded all our expectations in just about every respect.

’It has been wonderful to watch his progress and to see how much he has learned, and how much joy he brings to everyone around him.

’Perhaps the most important thing of all is not what we can teach Noah, but what he can teach us.’

When Mrs Wall went for her 12-week scan doctors discovered that her unborn baby had spina bifida, a condition which affects the development of the spinal cord. Mrs Wall and her husband were adamant that their son deserved the chance to live, so she gave birth. He was born paralysed from the waist down 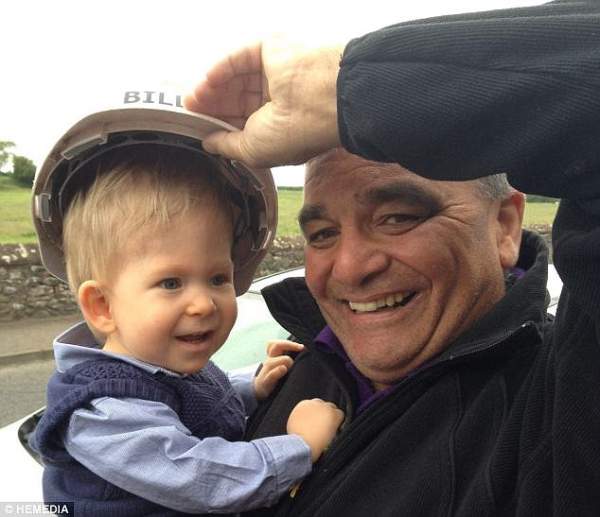 ’We’ve had three years not knowing how long he’s going to live so to hear his brain’s almost back to normal is beyond belief,’ said Mrs Wall. Noah is pictured with Billy Byrne from DIY SOS

Doctors also told the couple that the condition had left a massive hole in Noah’s back which they said they would be unable to stitch up.

During the pregnancy, the couple were regularly offered a termination but they stood firm, adamant that their son deserved the chance to live.

Noah was born on March 6th 2012 and was paralysed from the chest down.

Mrs Wall said: ’The first thing we heard when he was born was him taking a breath and then crying.

’We’d almost been told to give up hope so to see him crying and looking up at me was just amazing. I’ll never forget it – to hear that his brain’s almost back to normal was just as special.’

Noah was allowed home after ten days in hospital but due to several emergencies has had to return to hospital on many occasions since then.

No-one expected this to happen. We’ve had three years not knowing how long he’s going to live so to hear his brain’s almost back to normal is beyond belief

The space left by the brain in Noah’s head was filled by cerebrospinal fluid (CSF) which is drained regularly by a fitted shunt.

The fluid became infected when Noah was seven weeks old and he had the shunt removed, allowing two and a half litres of fluid to be drained manually using a needle in his head.

The shunt was then replaced and the shape of Noah’s head is now closely monitored.

By his second birthday, Noah was talking and singing like other toddlers.

Mrs Wall said the family were trying to make day-to-day life as normal as possible.

She said: ‘He is potty training now and he knows if he uses the potty then he gets chocolate.

‘It is amazing that he understands what it is and what he is supposed to do.

‘He can also use a fork, spoon and a cup by himself. He knows a lot of different animals and will tell you to put the light on or off or to open the door.

‘He chooses things and makes decisions. He never shuts up and he can sing as well.

Noah requires constant supervision and has to be massaged five times a day as well as undertaking regular sessions of physiotherapy and hydrotherapy.

HOW CAN THE BRAIN RECOVER FROM HYDROCEPHALUS? He said: ‘No one can explain how this recovery happened as it’s so complicated.

’We try to find a broad recovery through brain scans.

‘It shows never to give up hope and to always plan for change to happen. I and every parent will be delighted to hear this story.

‘It is impossible to predict the future from one scan, as brains are a very plastic organ.

‘The child has obviously been treated correctly and the new scan indicates the decision to opt for treatment was the correct one.

‘Healthy people manufacture fluid surrounding our brains constantly, it is manufactured and absorbed in the correct balance.

‘If something happens to disturb that fluid it builds up in the brain and can have consequences, as is showed by this boy’s first, very dramatic scan [showing the build up of fluid around his brain].

‘Again, that was a snapshot in time. When that fluid was drained, the child has gone on to show good development.

‘He still has fluid on the brain – his latest scan doesn’t look like yours or mine.

‘But the prognosis is good. He could become a doctor or Prime Minister. Intellectually, we will have to wait and see what he is capable of.’

Mr Shieff added: ‘This level of recovery, it’s a relatively uncommon situation. It’s less common to see this kind of problem, and improvement would usually be expected, but the measurement of improvement in this case is uncommon.

‘The first scan showed that the volume of brain cells is less than we would have expected due to the fluid.

‘Some brain cells were damaged and may not gain functionality, but some were squeezed and were able to work once the fluid is drained, much like an arm that has gone dead can work once it “wakes up”.

‘Some may not have fully developed, but as the boy became older certain functions developed, which is why a three-year-old can do more than a one-year-old.’