SPACE Force is preparing to “protect and defend US interests“ as far away as the moon after an official report warned of a lunar war.

An Air Force Research Laboratory report details how the Earth’s only natural satellite – and the space around it – could become a new military frontier, SpaceNews reports.

An Air Force Research Laboratory report details how the Earth’s only natural satellite – and the space around it – could become a military frontierCredit: Reuters

The report states: ’The reach of USSF’s sphere of interest will extend to 272,000 miles and beyond’Credit: Reuters

The 23-page document, “A Primer on Cislunar Space”, was published by the Air Force Research Laboratory just two days before the US government admitted they could not explain 144 sightings of flying objects.

The report explains it “is targeted at military space professionals who will answer the call to develop plans, capabilities, expertise, and operational concepts.”

It adds: “When established in December 2019, USSF [United States Space Force] was tasked with defending and protecting U.S. interests in space.

“Until now, the limits of that mission have been in near Earth, out to approximately geostationary range (22,236 miles). “

Space Force was launched in December 2019 as the first new military service since establishment of the Air Force as an independent entity in 1947Credit: AIR FORCE

The report adds: “With new US public and private sector operations extending into cislunar space, the reach of USSF’s sphere of interest will extend to 272,000 miles and beyond – more than a tenfold increase in range and 1,000-fold expansion in service volume.”

Cislunar space is the space between Earth and the moon.

The report adds: “As USSF organizes, trains, and equips to provide the resources necessary to protect and defend vital US interests in and beyond Earth-orbit, new collaborations will be key to operating safely and securely on these distant frontiers.”

Col. Eric Felt, the director of AFRL’s Space Vehicles Directorate, said: “As commerce extends to the moon and beyond, it is vital we understand and solve those unique challenges so that we can provide space domain awareness and security.”

With the moon more than 238,000 miles from Earth, countries are scrambling to fill the gap between the planet and our natural satellite.

Air Force Colonel Eric Felt said earlier this month: “Space war is going to look a lot like the Cold War in a couple of different ways.

“First of all, we hope nobody’s actually exchanging destructive weapons with each other and that we don’t just hope, but we take active actions to deter that from happening.

“The nature of conflict in space is that there is an offensive advantage, or a first-mover advantage, in that it is a lot easier to attack somebody else than to defend your own stuff.

“And we’ve seen that before—that’s the same as with…nuclear weapons.”

Donald Trump signs the 2020 Armed Forces Day Proclamation after being presented the official flag of the United States Space Force in the Oval OfficeCredit: Getty

Space Force was launched in December 2019 as the first new military service since establishment of the Air Force as an independent entity in 1947.

Donald Trump said at the time: “When it comes to defending America, it is not enough to merely have an American presence in space. We must have American dominance in space.

The push to create a military space service began well before Trump entered the White House but his relentless advocacy dulled what remained of opposition inside the Pentagon.

The US government last week admitted they could not explain 144 sightings of flying objects spotted since 2004.

In the much anticipated document, officials said that despite not finding any evidence the UFOs filmed by navy pilots were aliens, that “explanation can’t be definitively ruled out.”

Following the release of the report, alien conspiracy theorists have slammed officials for allegedly hiding the truth from the public.

The report has only explained one single sighting – a deflating balloon. 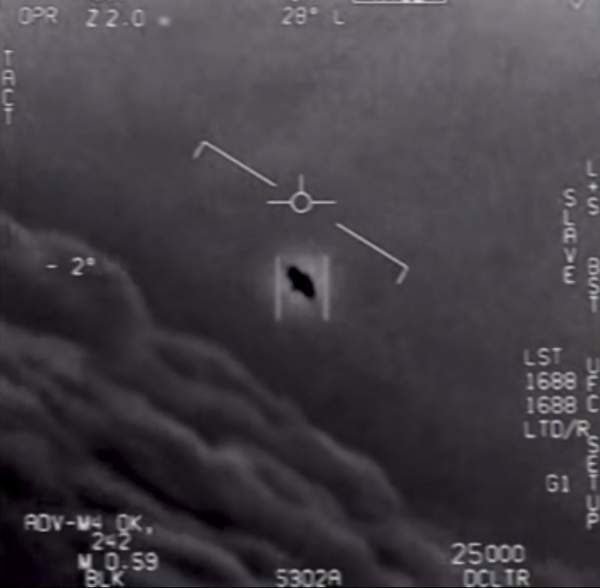 The US government last week admitted they could not explain 144 sightings of flying objects spotted since 2004Credit: AFP

In the nine-page document, 144 sighting of “unidentified aerial phenomenon” (UAP) were examined after being reported by pilots.

Yet, despite the vast array of unexplained flying objects captured over the years, the US government was only “able to identify one reported UAP with high confidence.”

The report stated: “In that case, we identified the object as a large, deflating balloon.” That case was put down to “airborne clutter.”