In an exciting new review titled “ Fossil apes and human evolution ” for the reputed ScienceMag journal, the major discoveries in fossil apes and human lineage are re-examined since Darwin’s claims that were made 150 years ago. Darwin had famously argued in his monumental work “ The Descent of Man ” (1871), that human beings originated in Africa.

Since Darwin’s time, a host of mind-boggling fossil and bone discoveries related to fossil apes have sprung up across the world, and with them, corresponding research, painstaking analysis, and radiocarbon dating.

The evolution of fossil apes and primates has always held a fascinating appeal in human imagination and history. In general, fossil apes have often been dismissed by a large group of scientists as not being important enough in the early human evolution debate. This back-and-forth discussion has certainly enriched a diverse subject, as other groups of scientists have conferred upon hominins “ starring evolutionary roles .”

The study in question argues that fossil apes inform us about essential aspects of human nature and behavior .

Sergio Almécija, lead author of the review and a senior research scholar-scientist at the reputed American Museum of Natural History (AMNH)’s Division of Anthropology, concurs with the complexity of this endless debate.

“When you look at the narrative for hominin origins, it’s just a big mess–there’s no consensus whatsoever. People are working under completely different paradigms, and that’s something that I don’t see happening in other fields of science.” 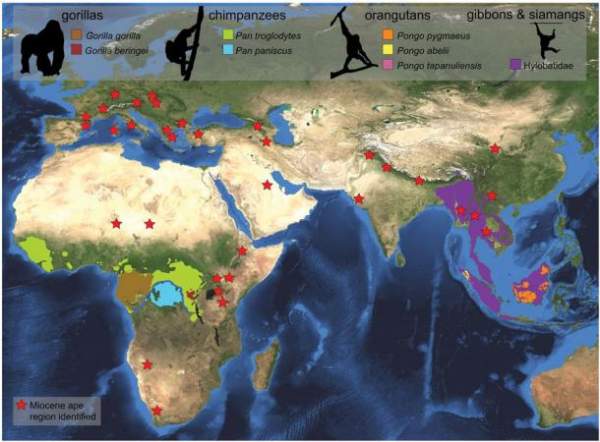 Extant and fossil ape distribution across the planet. Figure from the latest study. ( ScienceMag journal)

“One hundred fifty years later, possible hominins–approaching the time of the human-chimpanzee divergence–have been found in eastern and central Africa, and some claim even in Europe. In addition, more than 50 fossil ape genera are now documented across Africa and Eurasia. However, many of these fossils show mosaic combinations of features that do not match expectations for ancient representatives of the modern ape and human lineages. As a consequence, there is no scientific consensus on the evolutionary role played by these fossil apes.”

Sergio Almécija is also careful to point out, however, that Darwin himself cautiously could not make any grandstanding claims owing to the paucity of fossil discoveries at the time. Darwin’s theory “that humans originated in Africa from an ancestor different from any living species” was largely speculative.

The study tells us a bit of something that we already know. Humans diverged from apes (nonhuman hominids), particularly the Pan lineage of chimpanzees, sometime between 9.3 million years and 6.5 million years ago.

The first of the evolutionary traits were bipedal locomotion (walking on two feet instead of four) and smaller, blunt canines. This has been gauged from hominid fossils from the late Miocene in Africa , in Chad and Kenya in particular.

An erect posture, larger brains and the opposable thumb, which allowed for a greater control and usage of specialized tools, followed. At the same time, the formation of some kind of communication through language also evolved. The latest study identifies two major approaches in the resolution of the human origins problem. There is the top-down approach, relying on analyzing living apes, particularly chimpanzees. As referenced earlier, the Pan genus is a sister taxon to the human lineage. Conversely, the bottom-up approach lays great emphasis on a larger pool of extinct apes.

As the study puts it, “modern hominoids represent a decimated and biased sample of a larger ancient radiation and present alternative possibilities for the morphology and geography of the Pan-Homo LCA.” LCA refers to the “Last Common Ancestor.” It is these two approaches that are at loggerheads over which course best suits the human origins debate.

Where Does Science Go From Here?

The researchers and scholars of the study are firmly convinced about certain renewed approaches that must be undertaken immediately, to enhance our field of learning.

First, they advocate undertaking fieldwork in unexplored territories where Miocene apes are yet to be found. This would make fossil apes absolutely essential in reconstructing the starting point from which humans and chimpanzees evolved. Leaf monkeys (also fossil apes) in the Miocene period that walked on two feet and also had opposable thumbs from a vintage engraving. ( Morphart / Adobe Stock)

Second, there is an urgent need for methodological advances in morphology-based phylogenetics and paleoproteomics. In layman’s terms, this is needed to enhance our understanding with respect to retrieving molecular data from beyond the boundaries of ancient DNA, which is proving to be limited at best.

Third, the world of data, and riven models present new possibilities in the fields of science and archaeology. Particularly, there should be a focus on modelling driven by experimental data, that can successfully integrate morphological and biomechanical information.

Finally, they believe that the top-down versus bottom-down debate can be put to rest with a simple fix. Each new fossil discovery mustn’t be rushed to provide a “starring role” in the evolutionary calendar, especially in the absence of a “testable hypothesis.”

“Living ape species are specialized species, relicts of a much larger group of now extinct apes. When we consider all evidence–that is, both living and fossil apes and hominins–it is clear that a human evolutionary story based on the few ape species currently alive is missing much of the bigger picture,” said study co-author Ashley Hammond, an as‌sistant curator in the AMNH’s Division of Anthropology.

Kelsey Pugh, an AMNH postdoctoral fellow and a co-author on the study concludes by saying,

“The unique and sometimes unexpected features and combinations of features observed among fossil apes, which often differ from those of living apes, are necessary to untangle which features hominins inherited from our ape ancestors and which are unique to our lineage.”